The Folly of Heathrow Runway 3

First of, let me state for the record that this is not an environmental rant around the Government’s persistence with trying to increase capacity at airports.  I’m all for it, even if it does wreck up the environment.  We as humans have a thirst for adventure, and we’re going to satisfy it one way or another, and air travel (and within 100 years, space travel) is the best way to get our fix.

Anyway,  what with the ever increasing number of aircraft falling out of the sky (see New York, Amsterdam) quite close to airports,  it strikes me that at some point, one is going to fall out of the sky into a residential area – you only have to look at the 747 freighter that crashed into flats at Amsterdam a decade or so ago. Heathrow’s approach/departure vectors pass over the city of London, so to increase the number of flights passing over surely increases the chance that one of those might have a problem.  What about the 777 that landed ‘a little short’ coming in from China last year?

Someone asked me not long ago where I thought an extra runway for London should be built.  My answer was ‘Birmingham’.   I wasn’t being obtuse, more thinking differently.  My reasoning?  Logistically,  it could be within 25 minutes of Central London.  All you need do is build a high-speed rail line ALA the Japanese.  I can’t see the London Underground being much faster.  Plus a good % of the country is accessible within 2-3hrs, unlike London which requires a flight connection to get near that time. And there is a reasonable amount of room for expansion.  However, I’d like to revise that statement and suggest East Midlands.   Similar reasons, but the flight path is reasonably away from built-up areas (Kegworth excluded for this purpose of course!) so apart from the people on the plane, hopefully the worst your going to do is burn up a few trees. To be selfish for a minute,  its also ideal for us Midlanders to get too, being only 30 minutes up the motorway, but not increasing the number of flights over my house – not that this bothers me too much either!  As for airlines not using it,  we just use the ‘Ryanair’ approach and rename it London Metropolitan or something vauge like that – The American’s would certainly believe it.

The runway is already designed to cope with the largest aircraft; DHL, FedEx, TNT and UPS all use the airport as a base, and the Airbus A380 has been certified to land at the airport when they were looking at the A380F.

Of course, like any airfield in the UK, especially in relation to increasing the number of flights will attract significant local (and to a certain extent national) opposition,  but in all honesty, I think its the one solution that is the best compromise going.

Or so some newspapers would have you believe.   A story crept into the media on Friday basically saying that people  who use social networking sites were at a higher risk of cancer.

A UK Boffin has conducted a study http://www.iob.org/userfiles/Sigman_press.pdf and published it in the Biologist (the journal for the British institute of Biology) which has found a link between social-isolation and an increased risk from cancer, dementia, heart disease, diabetes, influenza, rheumatoid arthritis, lupus and the common cold.

This has been attributed to people using Facespacewitterbo to interact, rather than gathering together to ‘network’.  Research has shown that isolation can impaire the the development of leukocytes which help fight disease by circulating around your body.   Really though,  other than panicking,  perhaps we should all just calm down.  It should be no surprise if you spend your entire time sat on your butt, eating high-fat, high-sugar diets that you may die earlier.  But hey,  in other research,  living life will induce death.   Non of us know when our ticket is called, so we may as well just get on with enjoying whatever we enjoy doing, as you don’t know when its going to end.

Good news from the MWC today reported by the BBC:-

Most manufacturers now produce chargers which work only with their own devices.

The re-charger will consume 50% less stand-by energy than today’s cables, the GSM Association (GSMA), an umbrella group for the industry, said.

The majority of new handsets will support the re-charger by 2012.

"This is a broad agreement that will move the industry to a single, energy-efficient charger for all mobile phones," said Michael O’Hara, marketing director for the GSMA.

In a statement, Mitti Storckovius, director of environment, devices at Nokia said: "By supporting this industry initiative on common charging solutions, and enabling consumers to choose if they need a charger with every new device or can re-use existing ones, we can contribute further in improving the industry’s environmental footprint."

The mini-USB connector will be used as the common charging interface.

Manufacturers had been under pressure from the European Commission to produce a standardised charger.

EU Industry Commissioner Guenter Verheugen told German radio station Deutsche Welle last week that there were more than 30 different kinds of charger in use across the 27-nation European Union.

The GSMA estimates the new charger will mean the potential elimination of up to 51,000 tonnes of duplicate chargers.

I came across this on the Internet today, and found it both humerous and thought provoking, the sort of thing Terry Pratchett’s ‘Death’ might say.

There was a merchant in Baghdad who sent his servant to market to buy provisions and in a little while the servant came back, white and trembling, and said, Master, just now when I was in the market-place, I was jostled by a woman in the crowd and when I turned I saw it was Death that jostled me. She looked at me and made a threatening gesture; now, lend me your horse, and I will ride away from this city and avoid my fate. I will go to Samarra and there Death will not find me. The merchant lent him the horse and the servant mounted it, and he dug his spurs in its flanks and as fast as the horse could gallop he went. Then the merchant went down to the market-place and he saw me standing in the crowd and he came to me and said, Why did you make a threatening gesture to my servant when you saw him this morning? That was not a threatening gesture, I said, it was only a start of surprise. I was astonished to see him in Baghdad, for I had an appointment with him tonight in Samarra.

Over the past couple of working days, I’ve been doing some research into some data visualisation techniques to help improve our understanding of some telecom’s expense information for a review we’re conducting.  I’m looking at radial graphs and whilst search, came upon Nexus Friend Grapher which is a pretty funky looking friend mapper for Facebook. 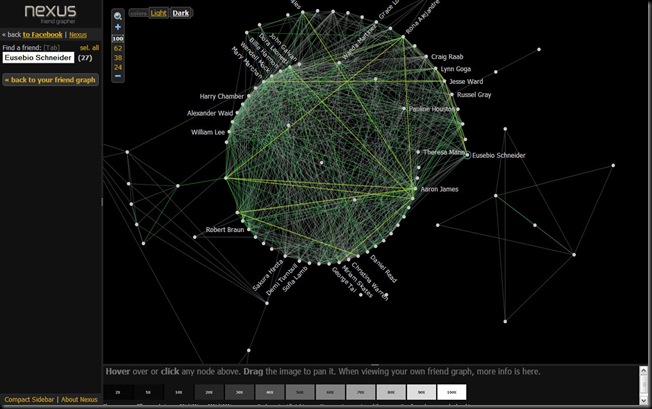 Basically, you feed in your Facebook profile and it spits out a graph similar to the above showing your friends and how they link with each other.  The above graph is using ‘random’ data, rather than my actual profile, and shows that my friend groups are split into 3 or 4 distinct groups, rather than mostly being merged as above.   Now all I need is for them to port it to Twitter!

I’d urge anyone on Facebook to give it a go when they’re at home,  it might reveal some interesting graphics!

I love this time in mid February when all the mobile phone manufacturers get together in Barcelona for the Mobile World Congress,  their ‘trade fair’ where they get to demonstrate their lovely new wares for the year ahead.

My favourite manufacturer HTC held its press conference this morning, and as ever, they’re certainly setting an example to the other manufacturers. 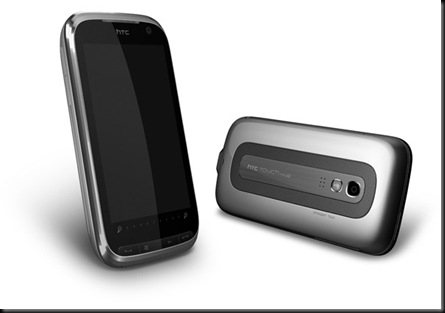 First off is the HTC Touch Pro2 featuring 3.6" 800×400 screen, 512mb ROM, 288 RAM and a 3.2mp camera.  One feature which sounds cool, but we’ll see what its like in operation, is the Speakerphone, which automatically turns itself on when you flip the phone whoops upside down its head.  This seems to be the flash business phone,  where as the 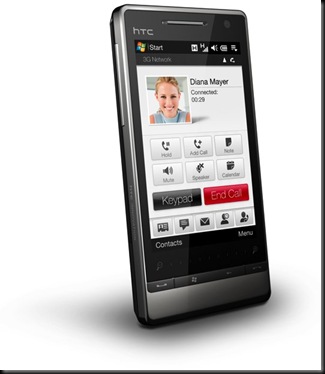 HTC Touch Diamond2 – an evolution of the existing Touch Diamond.  This time around, its got a 800×480 screen, 5mp camera and the same 512mb ROM/288mb RAM as its bigger brother, the Touch Pro2.

Which is annoying, because Id decided on the HTC Touch HD, but now I can’t see how that model fits in with the current lineup.  I’ll have to wait and see which one, T-Mobile (my current phone vendor) offers in the next few months.

Also coming up this afternoon from the MWC is the Windows Mobile 6.5 official announcement (hopefully).

Google have launched in the past week a new version of their Google Mobile Maps http://m.google.com/maps with two nice new features.   First one,  it now shows traffic on major UK roads, so motorways and some major A-Roads.  This is great to have in the car as you can see when the traffic is about to get bad.

The other new addition is Google Latitude (http://www.google.com/latitude) which allows you to share your location with friends and them to share with you.  This means that if you’re a bit bored for an hour, you can see who’s about and go join them.  Of course, all this would be organised by Twitter these days, but its still a cool feature.

So I’ve just sat through an hours Webex/Conference call around a product and service demonstration.  At the end, I got presented with what is perhaps the funniest message box I’ve seen for a long long time.

A bit harsh I thought!!

Today I’m working from home due to the plenty of snow that’s lying deep and crisp and even around the place, with more coming from the sky.  Its great that the company provides such facilities for use in appropriate circumstances.  I’ve managed to cobble together an effective office in a warm section of the house. 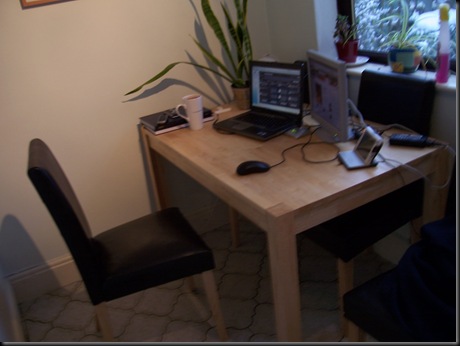 The only problem is that I’ve had to put the heating on, and I’m a bit tight with the gas at home.

Oh well, glad that we’re seeing similar conditioners to the South, it makes the place look so much nicer.  Hope everyone has either made it into the office, or is able to work effectively from an alternative location.

This error message is only visible to WordPress admins

Oh flaps. #TerryJones Are we sure it not just a flesh wound? pic.twitter.com/xm2H0kACGH

This week as part of our office 'New Year, New You' challenge, we're supposed to take a 24hr break from tech. So no WhatsApp, Social Media etc. But I also use tech to manage my life so... pic.twitter.com/10iJsHM4Tp

I've always liked 418 error code, but this made me properly lol in the office. pic.twitter.com/6vbJamIkwG